The Rich and The Pure – Press release! 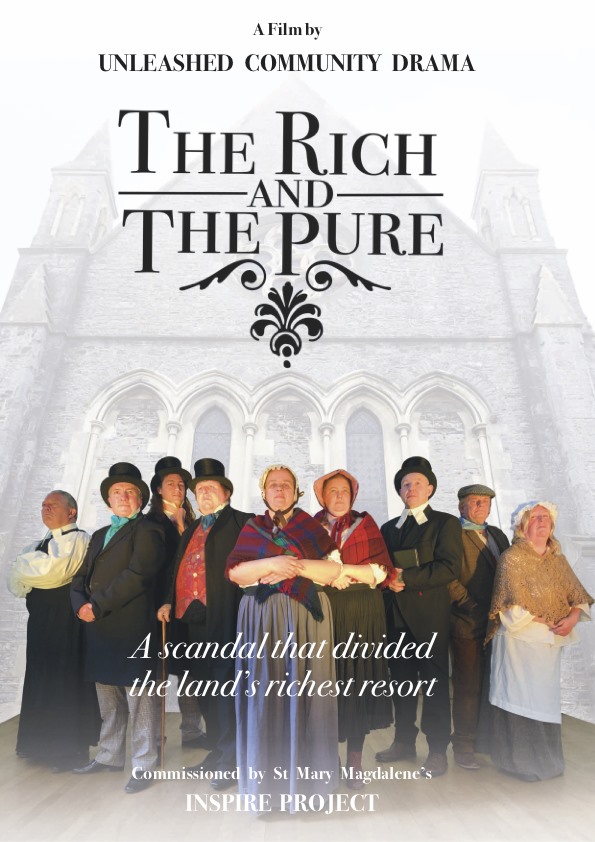 07 Jun The Rich and The Pure – Press release!

• TICKETS ARE NOW AVAILABLE below…

Unleashed Community Drama unveil their most ambitious project to date, a brand new film, improvised and written during lockdown. Based on the true story of how St Mary Magdalene’s Church in the parish of Upton came into being – a story of austerity in the richest resort in the land, set in the 1840s. The film weaves together the untold stories of the bread riots of Torquay, the cholera epidemic, whilst introducing a gallery of real-life, colourful characters from Torquay’s Victorian past. William Kitson, Lawrence Palk and Bishop Phillpots all come back to life in this fascinating and educational feature film recording the scandal of appropriated pews which divided a town and revealed the massive gap between the rich and the poor. Created and acted by a large cast of actors all drawn from the ex-homeless and recovery community of Torquay, this uniquely ambitious project was filmed over six weeks in the actual locations where the real history of the Bay unfolded. This film promises to be a unique and surprisingly shocking look back at the early days of the resort.

Commissioned by St Mary Magdalene’s Church as part of its Heritage Lottery Funded INSPIRE project, this hugely ambitious full length feature film comes with a companion documentary, chronicling how the film came into being and recording how it changed from a Heritage Theatre piece into a fully fledged costume drama with its own specially commissioned music score.

Unleashed Community Drama will be hosting a special premiere of the film on Sunday 19th September at The Little Theatre at both 2.30pm and 7.30pm. These will both be ticketed events which can be purchased via this website or through The Little Theatre’s Box Office NOW!.

The film will be available that night to purchase as a DVD in a double bill which will not only include the film The Rich and The Pure but also the fascinating behind-the-scenes documentary about the production of this unique project, including interviews with the cast and crew!